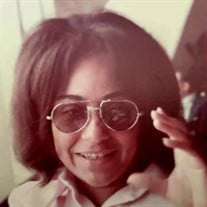 Kathleen Alicia (nee Adams) Hall, 72, was known affectionately as, “Cookie” Adams and then Kathy Hall. She entered into heavens gates, and the arms of her Lord, early Monday morning, September 20, 2021, she succumbed to chronic obstructive pulmonary disease (COPD). Through her faith in God, and medical treatments, she dealt with the illness while living a full, joyful life. Family and friends will find comfort in acknowledging that memories of the love & joy in her smile & laughter will live on… She was born, March 8, 1949, the daughter of the late John Reginald and Kathryn Blanche (nee Howard) Adams, Sr.; wife of William Faucette “Bill” Hall; loving mother of Carmin Alicia (Branden) Cobb; dear grandmother of Lance Michael Cobb (5), Blake Michelle Cobb (2); dear sister of the late Sandra Adams Julien, John Adams (Deborah) Adams, Jr., Karen (Christopher) Crenshaw, and the late Beverly Adams and late Kevin Bond; sister-in-law to Mattie “Carol” Hall Holliday (Cliff) and Henry Edward Hall; stepsister of Louise Bourassa, Shirley Echols, and Willie Bond, and adopted sister Katherine Hagen; and a host of many other nieces and nephews and friends. Kathleen was a graduate of Laboure Catholic Girls High School, she then attended Fontbonne University and earned a Bachelor of Arts. She then attended the George Warren Brown School of Social Work at Washington University in St. Louis where she earned her Masters of Social Work degree. Kathy became a Social Worker for the Children’s Services Division of the City of St. Louis. Then for ten years Kathy worked for the Chicago Public School District. Later, she relocated back home and worked for twenty years as a School Social Worker for the St. Louis Public School District. Kathy Hall was greatly admired by her co-workers but was best known and beloved for the compassion she had for the children and families she served. Family was always near and dear in Kathy’s heart and they always spent time together and remained close. When she became a mother, and a great one at that, her only child, Carmin Alicia, became the “joy” of her life. In fact Kathy always called her, “my Carmin,” as if that was her first name. In 2013, when Carmin got married, Kathy’s joy was extended to her son-in-law, Branden Cobb, who she also affectionately then called, “my Branden.” You can only imagine the joy, love and laughter Kathy had when her two grandchildren, Lance and Blake were born! They now have a wonderful, guardian “angel,” who’ll forever be watching over them. In her retirement years, Kathy enjoyed having more time to spend with her beloved husband of 42 years, Bill Hall; they truly enjoyed regularly dining-out all over St. Louis! They also enjoyed travelling together. In addition to trips to see the grandchildren, they had the opportunity to explore Europe when Bill was selected to teach political science and international relations courses at Webster University’s International campuses abroad. Finally, all who knew Kathy will attest. Yes, she not only loved her family but also her very dear and close, lifelong friends. Therefore, in celebrating the life of Kathleen, “Cookie,” Kathy Adams Hall- “Memories of the love & joy in her smile & laughter will live on…”

Kathleen Alicia (nee Adams) Hall, 72, was known affectionately as, &#8220;Cookie&#8221; Adams and then Kathy Hall. She entered into heavens gates, and the arms of her Lord, early Monday morning, September 20, 2021, she succumbed to chronic obstructive pulmonary... View Obituary & Service Information

The family of Kathleen Alicia Hall (Cookie) created this Life Tributes page to make it easy to share your memories.