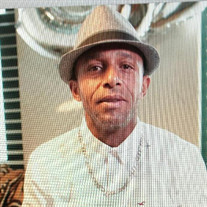 LaBron Emanuel Taylor, Sr., was born in Cleveland, Ohio, on July 18, 1970, to Carol Taylor and Emmanuel Mustafa Barnett. After graduating from Kennedy High School, he enlisted in the United States Navy, where he served honorably. During his time in service, he met the love of his life, Yolanda. After completing his military service, he and Yolanda moved to St. Louis, Missouri. He worked several jobs but found the greatest satisfaction in his entrepreneurial endeavors. He founded his own company, Ground Up Motorsports, where he could use his skills to work on cars, his lifelong passion. Even after the business location was closed, he continued his love of working on cars. He was often fixing and restoring cars in the driveway of the family home while simultaneously working his full-time job. He was always a reliable, dutiful, and loyal worker throughout his career. He was a dedicated father, grandfather, and husband who committed himself to never missing a significant moment in his family's lives. Despite his busy schedule, he would make every practice and game, often heading to work with little sleep after supporting his sons and his teams from the sidelines. He worked tirelessly to send his sons to private school, consistently working overtime and the night shift. He was a father to two but a mentor and coach to many. In his free time, he enjoyed many hobbies, including attending car shows, hunting, fishing, and shooting at the gun range. He would often take his family with him as he indulged in his hobbies. He was a doting uncle, a reliable caretaker, and a faithful friend. LaBron passed into peace on December 23, 2021, after a sudden illness. LaBron is survived by: his wife, Yolanda; their children, LaBron, Jr. and Jarred; mother, Carol Taylor; brothers, Aaron and Donnie; a grandson; sister-in-law and brother-in-law as well a multitude of extended family. Although time was cut short, he touched innumerable lives, proving that quality of existence exceeds the quality of time. He will be deeply missed.

LaBron Emanuel Taylor, Sr., was born in Cleveland, Ohio, on July 18, 1970, to Carol Taylor and Emmanuel Mustafa Barnett. After graduating from Kennedy High School, he enlisted in the United States Navy, where he served honorably. During his... View Obituary & Service Information

The family of Labron E. Taylor created this Life Tributes page to make it easy to share your memories.

Send flowers to the Taylor family.