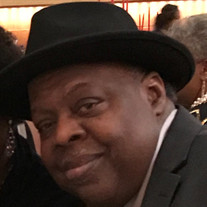 Lamont Burdett Wallace was born the only child of Willie Lee and Jane Wallace on October 16, 1951 in Saint Louis, Missouri. Lamont accepted Christ as his personal savior at a very early age at Saint Theresa Catholic Church, where he also began his education. He later united with Saint Peters A.M.E Church in 1967. He transferred to St. Louis Public Schools and became a proud graduate of Northwest High School, Class of 1971. Lamont went on to attend and graduate from Rankin College with a degree in Auto Body and Welding. One of his early career roles was with Combustion Engineers. He shared many tales of walking to work in the bitter cold and working all the overtime he could until the union made him stop. After seven years, Combustion closed its doors and Lamont went on to work for H & R Auto Body, which he loved. That sustained him until he began his longest career position in 1984 with the White Rodgers Division of Emerson Electric. Lamont and Sandral Richardson met in 1993, and after a friendship turned into a courtship, they were united in marriage on May 12, 2000. Along with this union, Lamont became a loving father to their son, Jordan Richardson. Lamont is fondly remembered by his high school classmates for his athletic abilities. He was active in football, wrestling and track and field. He was part of the 4 x400 relay team during his freshman and sophomore years that broke the school record. Lamont also loved bowling. He enjoyed cooking and was a salad-maker extraordinaire. All who know him, know of his love of music and dance. Up until his illness, he was practicing his dance moves in preparation for his upcoming Northwest High School 50th year class reunion. After an unexpected illness, he departed this life and earned his wings on Tuesday, August 17, 2021. He was preceded in death by his parents and brother-in-law Anthony Richardson. He leaves to cherish his memory, his beloved wife, Sandral, son Jordan, grandson Jasiah, his sisters-in-law Debora Murray, Christy Richardson, and Angela Richardson, brother-in- law, Herndon Richardson (Kim), and a host of nieces, nephews and other relatives and friends including his granddog Marley

Lamont Burdett Wallace was born the only child of Willie Lee and Jane Wallace on October 16, 1951 in Saint Louis, Missouri. Lamont accepted Christ as his personal savior at a very early age at Saint Theresa Catholic Church, where he also began... View Obituary & Service Information

The family of Lamont Burdett Wallace created this Life Tributes page to make it easy to share your memories.

Lamont Burdett Wallace was born the only child of Willie Lee...

Send flowers to the Wallace family.