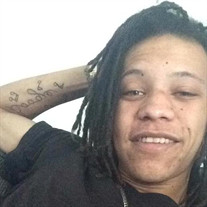 Larry Rendell Love was born on February 13, 1996 in St. Louis, Missouri to LaRissa Martin and Lawrence C. Love, III. He was preceded in death by his paternal grandparents, Lawrence C. Love, II and Barbara J. McCoo, his cousins, Tyrell, Kyri and Kenny of St. Louis. Larry attended St. Louis Public Schools and graduated from Vashon High School in 2015. He had recently tested at the American Trade School for placement in their electrician program. He was previously employed by several major franchises and general merchandising companies, but his favorite job of all was Home Health Care, where he cared for his grandfather, Lloyd. While Larry was visiting his grandfather, he also took the time to build close relationships, having serious conversations and building meaningful bonds with his grandfather’s close neighbors. Larry loved everyone and was loved by everyone he was a person that you could count on. If he said he was going to be there, he was there on time and if he had something to help you, it was yours. He was the man with a plan and he was always working to help in any way he could. Larry loved his grandparents, Lloyd and Jacqueline. If it was within his doing, it would be done. He would go and sit with his Grandpa Lloyd anytime of the day. He was the go-to man and the ride provider for his baby sister, Raven. You can say he was the Dance Brother, he was there for her always even if it meant he had to miss hanging out on those long Competition weekends. He loved everyone’s children, his “Binky Baby” SaNiya, and his “Grandson” Chase. He loved all animals and they loved him. If he could, he would own all the stray “Cats and Dogs”. Larry Rendell Love is survived by: his mother ~ LaRissa Martin; stepfather ~ Harold Fraction; father ~ Lawrence C. Love, III; one brother ~ Reginald; five sisters ~ Melissa, Latasha, Brittany, La Taundra and Raven; four nieces; four nephews; his maternal grandparents ~ Lloyd and Jacqueline Martin; three uncles; four aunts; his great uncles and aunts; and a host of cousins, a great extended family, friends, his cat “Bud” and his dog “Kodak”.

The family of Larry Rendell Love created this Life Tributes page to make it easy to share your memories.

Send flowers to the Love family.