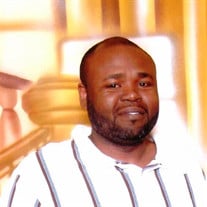 Lester Jermaine “Big Les” was born on August 24, 1972 to Mildred Jeffery and John Cole in Kinloch, Missouri. Lester was baptized on April 3,1983, under the leaders of Rev. G.W.W Harrold at Memorial Tabernacle Baptist Church. Lester received his education in the Ferguson-Florissant School District where he graduated in 1990. Lester had a passion for food (to cook and eat), so his life works were in the culinary arts field. He was continuing his education taking business courses that would allow him to own his own business. His dream was a specialty donut shop in the Berkeley area. Lester was a great debater, there was no quick and easy conversation with him. He made you think about what you were going to say before you said it because he had an answer for you already as to why your thoughts would be different than his. He always saw things not in black and white for sure. He had an awesome sense of humor, did not smile much but if he did, you could bet he had done something. His life touched so many and he will be missed greatly. He was that Big Cuz, Uncle, Friend and much more. Lester will always have a special place in the heart of: his mother ~ Mildred Robinson and father ~ John Cole (Linda), and stepfather ~ John Robinson, his brother ~ Thomas Robinson (Charnell) and his sisters ~ Marshay Cole, Jessica Cole-Moore (Dannie), Latoya Cole-Mays (Robert) and Lakeisha Cole. During his 45 years on this earth, he was privileged to marry Akiba Nash. Having no biological children, he was graced with two daughters ~ Erin Nash and Jasmine Morris and three grandsons ~ David Green, III, Jovan Jermaine Green and Pharaoh Green. His life was also shared with Harmony Camden, again being allowed to gain four more daughters ~ Akeya, Mycala, BreAnna and Neleah Camden. In addition to Nylah Kennedy, Amyah McElmmury, Eli Watkins and I’vy Howard. Cherishing his memories are: his great aunt, aunts, uncles, nieces, nephews, cousins and friends.

The family of Lester Jermaine Jeffery created this Life Tributes page to make it easy to share your memories.

Send flowers to the Jeffery family.