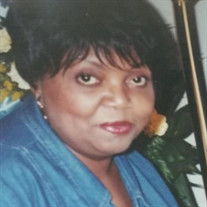 Madeleine Carrol Tolbert (Carrol) was born in Saint Louis, Missouri on February 26, 1948, to the union of the late John Aaron Tolbert, Sr. and the late Jessie Mae Tolbert. She was the fifth of six children born to this union. Brothers, John Jr. and Claude Sr.; sisters, Leona Nelson Irvin, Karen Evans and Johnetta Williams; son, Phillip; daughter, Michelle; and granddaughter, Avis Riddle preceded her in death. Carrol was raised in Kinloch, Missouri. She grew up as a scholar in school and was educated in Kinloch Public Schools. In 1964 she married Willie Pete Robinson. Her career included working for National Vendors, a manufacturing company for over 10 years, and she completed her career cycle working for the U.S. Postal Service. She was also a member of the U.S. Armed Forces Reserve for 20 years, where she met and made several of her lifelong friends. Carrol loved English and History, was an avid reader and had a zest for life. In her hay-day, her home was the place to visit for conversation, an occasional cocktail and a good laugh. She could be the life of the party. A holiday – under any name was her favorite. It meant family, friends, and socializing. The icing on the cake was the entertainment and joy of being the great-grandmother of three girls Za’Riyah, Toni Madeleine and Makenzie – the wild bunch. She could bend your ear with stories on a daily basis, about those three. The day prior to her transition, although she was not feeling well – she smiled and said “I saw the babies today,” that was the light for that day. She also enjoyed watching reruns of Gunsmoke, Bonanza, Big Valley or any western. Her other most recent past-time was examining politics and the climate of social justice. She had a heart of GOLD. She leaves to cherish her memory: two daughters, Iris Robinson Riddle (Raymond) and Temothy Robinson; one granddaughter, Cydney Robinson; three grandsons, Romiyus Gause, Jr., Jevone Robinson and Cyrus Riddle; three great-grand children; Zaryah, Toni Madeleine and McKenzie, one brother, Hermon Tolbert, Sr.; six sisters, Dorothy Tolbert, Charlotte French, Judy Moore, Patricia Douglas, Harriet Brown and Deborah Jackson; one sister-inlaw, Irene Tolbert; special friend, Sandra Wilson and Sandra Patrick; special cousin, Elmira Thomas; and a host of other relatives and friends

Madeleine Carrol Tolbert (Carrol) was born in Saint Louis, Missouri on February 26, 1948, to the union of the late John Aaron Tolbert, Sr. and the late Jessie Mae Tolbert. She was the fifth of six children born to this union. Brothers, John... View Obituary & Service Information

The family of Madeleine Carrol Robinson created this Life Tributes page to make it easy to share your memories.

Send flowers to the Robinson family.