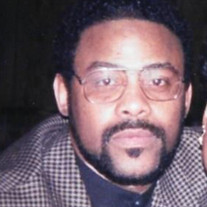 Marvin William Walker was born on July 22, 1957 to Helen and William Walker. Marvin was the eight child of fourteen children. He was a great patriarch of his family and at many times was the glue that held them together. He loved his family and made sure he contributed to the well-being of them all. Marvin graduated from Northview High School. He was very handsome and charming and easily one of the most popular students in school. In 1975 he met Bessie Walker, a beautiful and sassy young lady. The two were inseparable. In 1977 the two wed and started a family of their own. They produced three vibrant children; Derrick, Marvin and Shatina. Marvin was a hard worker in every aspect of his life and prided himself on taking care of his family. He worked various warehouse jobs, but his most memorable job was Saint Louis Community College in the Maintenance Department. Marvin was a proud and strong man that demanded respect. He was the anchor of the family, and without any doubt, was the person his family depended on in their time of need. Marvin had the greatest sense of humor and style that would impress the greatest critic. He loved music, especially bands like the Whispers, Marvin Gaye and The Temptations. Also, one of his great pastimes was watching Western movies that starred Clint Eastwood and John Wayne. He loved to cook, play spades and dominos, dance, skate, play basketball and overall, spend time with his family and friends. Marvin fought many battles in his life but throughout it all remained loyal to his loved ones. Tragically in 2002 Marvin suffered severe brain damage in a car accident that left him immobile. He lived the remainder of his life in the care of various nursing homes and his wife, Bessie. Even through all the pain, he was able to maintain his vibrant smile and charisma. Marvin departed this earth on November 5, 2021 with his wife by his side. He was preceded in death by his mother, Helen Edith; father, William Bud Walker as well as his older sister, Kathleen Williams and his younger sister, Angela Griffin. He leaves behind his wife of forty-six years ~ Bessie; his children ~ Derrick William Walker, Marvin Darrell Walker and Shatina Renee Walker; four grandchildren ~ Arianna Renee Walker, Arion Ryan Walker, Aaron Josiah Walker and Aaliyah Renee Dews; brothers and sisters ~ Vernon (Terri), Janet (Arlyn), Carolyn, Joyce, Dennis, Rosalind, Leonard (Lashonda), Kevin (Latesa), Mark (Laverne), William (Tangie) and Patrick (Joycealyn) and countless nieces, nephews and many friends that will miss him dearly. Marvin’s faith in Jehovah God was unbreakable, regardless of any hardship, until his last breath. Marvin created and contributed to a great legacy that will continue forever. He will be greatly missed.

Marvin William Walker was born on July 22, 1957 to Helen and William Walker. Marvin was the eight child of fourteen children. He was a great patriarch of his family and at many times was the glue that held them together. He loved his family... View Obituary & Service Information

The family of Marvin William Walker created this Life Tributes page to make it easy to share your memories.

Send flowers to the Walker family.