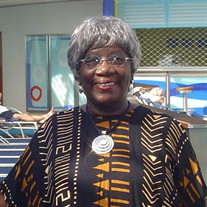 Life Reflections Mary Bernice (Duncan) Dixon was born April 18, 1937 in Preston, Kemper County, Mississippi. She was the only child born to the union of Annie Idell Gage Rogers and Wilbur Duncan. In 1950, Mary moved with her family to St. Louis, Missouri. Mary graduated in 1956 from Washington Technical High School in St. Louis, Missouri, where she studied business. After graduation, she moved to Chicago and began working at Provident Hospital as a medical typist in the Radiology Department. On July 12, 1959, she married William Nathan Dixon, her high school sweet-heart. They were blessed with two wonderful children, Kelly Anne and William Kenneth. They enjoyed fifty-five wonderful years of marriage until his passing on October 9, 2014. Following her dream to further her education, Mary attended college part-time while continuing to work and raise her children. She graduated from Chicago State University in 1968 with a Bachelor’s degree in English. In 1981, she received her Master of Education degree from National Lewis University in Evanston, Illinois. She further became certified in Administration and completed graduate work in Special Education and Reading. Mary devoted her life to education. She was passionately committed to training future leaders. She spent thirty-one years as a high-school English teacher and programmer in the Chicago Public School system. As a testament to the impact she had on their lives, many of her students stayed in touch over the years often reminding her of her demanding nature. She cherished those relationships and proudly and humorously claimed complete credit for their success. In 1999, Mary and William retired and moved to Greenville, Illinois. Although she spent many hours watching the local wildlife while ignoring her housework, she continued to seek opportunities to serve. She volunteered at the Greenville Hospital Thrift Shop and served the community for fourteen years through her work at the Bond County Senior Center and the VITA program. She was an active member of The Shakespeare Club for several years. Mary also spent her retirement years learning to cook for hundreds while assisting her daughter with her catering venture. Never before had she peeled so many potatoes and washed so many dishes but she did it all with joy. She loved following the University of Wisconsin football team as well. She spent many a fall and winter traveling around the country to special games with her family. She too, proudly watched her son march and play trumpet, as a member of the University of Wisconsin Marching Band, in the 1994 Rose Bowl Parade. Somehow sitting still during retirement just wasn’t in the cards. At an early age, Mary accepted Christ. She loved serving as part of the Greeters Ministry at New Life in Christ Interdenominational Church in Lebanon, Illinois. She also enjoyed the continued fellowship at post-service brunch with several members. Mary departed this life on Friday, April 15, 2016 in St. Louis, Missouri after a brief illness. She was preceded in death by her parents, six brothers: Daniel Abraham Rogers (Ernestine), Joe Wesley Rogers (Lois), Willie Canvas Rogers, Theodore Rogers, Andrew Douglas Chambers (Modest) and James Lavell Chambers (Norma), and two sisters: Dixie Pearl Pruitt and Annie Mae Lewis. Mary leaves to cherish her memory: her children ~ Kelly Anne and William Kenneth; two sisters ~ Ora Lee Beecham-Bean and Edith O. Harvey; and numerous nieces, nephews, other relatives and friends.

Life Reflections Mary Bernice (Duncan) Dixon was born April 18, 1937 in Preston, Kemper County, Mississippi. She was the only child born to the union of Annie Idell Gage Rogers and Wilbur Duncan. In 1950, Mary moved with... View Obituary & Service Information

The family of Mary Dixon created this Life Tributes page to make it easy to share your memories.

Send flowers to the Dixon family.