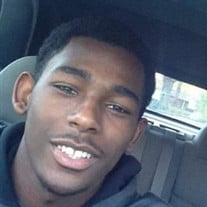 Mel’Vontae Paul Marshall was born in St. Louis, Missouri on February 14, 1998 to parents, Melonise Franklin and Maurice Marshall. He was named after his mother, grandmother and father. Mel’Vontae was a devoted father, son, brother, and friend. He was affectionately known as “Vontae” to his family and “Mel V” to his many friends. During his early years, Vontae enjoyed soccer and basketball. Always the tallest with skills to match. The skills he had on the basketball court were effortless. For Vontae, basketball was life. He got down on guitar hero too, he was the guitar hero champion. Vontae was smart, he loved math and science. He was an energetic child; he got his work done and then the fun began. Vontae enjoyed music and could play various saxophones and the drums. Vontae attended high school at Hazelwood Central in Hazelwood, Missouri until his last year where he received his diploma at Byron P Steele as a 2016 graduate in Cibolo, Texas. During his time at Byron P Steele, Vontae met his high school sweetheart, the love of his life and mother to his only son, Dene Clay. The biggest blessing Vontae received was his beloved son, Isaiah. If you knew Vontae you knew he loved and cherished his son. Isaiah was a will always be the light and legacy of Mel’Vontae. The most important thing Vontae would want is for everyone to love and care for his child as he did. Vontae was good with his hands, he took interest in working on cars. A bond that he and his father shared. At times, Vontae knew more about the cars than dad. He was financially savvy. He could read a contract of warranty better than most and argue the merits. Generally winning. He wasn't afraid of work and held various jobs in St. Louis and San Antonio. Vontae had a special bond with his oldest brother Kenny. They spent a lot of time together playing games especially chess. They were truly best friends. The weekend after Mel’Vontaes’ 18th birthday was memorable because Vontae was so happy that he could finally see his brother for the first time by himself as an adult. Vontaes life consisted of family, friends, and loyalty. He brought laughter to whomever crossed his path. He had a caring heart for his loved ones. Mel’Vontae was best known for his vibrant personality, his loyalty, his fresh deep waves, and fresh fit. He was a big supporter for all his friends in the music industry. He loved cracking jokes and just simply enjoying the people around him. Most of all he was known for the love he showed everyone. Mel’Vontae leaves to cherish his memory: his devoted and loving mother ~ Melonise Franklin; father ~ Maurice Marshall; grandmother ~ Pauletta Franklin; his only and beloved son ~ Isaiah Marshall; the mother to his child ~ Blessing “Dene” Clay; his siblings ~ Kenneth Roberts, Gregory Hoover, Briana Marshall-Rollon, Tierra Marshall and Jalyn Sanders; and a host of aunts, uncles, cousins and friends.

Mel&#8217;Vontae Paul Marshall was born in St. Louis, Missouri on February 14, 1998 to parents, Melonise Franklin and Maurice Marshall. He was named after his mother, grandmother and father. Mel&#8217;Vontae was a devoted father, son, brother,... View Obituary & Service Information

The family of Mel'Vontae Paul Marshall created this Life Tributes page to make it easy to share your memories.

Send flowers to the Marshall family.