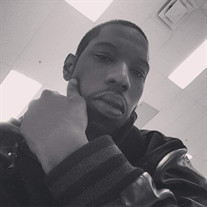 Michael was born on June 2, 1986 to the union of military parents, Marian Guest-Haynes and David Haynes in Santa Ana, California. Michael being a military child raised by his mother, who he always called “Mommy”, was able to travel and live in multiple geographical locations during in his life. Michael knew the Lord and visited many churches throughout his life. Michael attended elementary school in Okinawa, Japan. After his Mommy’s tour of duty in Japan, he continued his education in the Escambia School District in Pensacola, Florida. He graduated from Escambia High school in 2004. After high school, he was accepted at Florida A&M University. He was excited and proud to be a Florida Rattler. Shortly after moving to Saint Louis in 2012 with his Mommy, Michael was accepted and enrolled in Vatterott College Ex’treme Institute founded by rapper, Nelly. Michael was employed at Lowe’s for many years in several locations, Pensacola, Florida; Tallahassee, Florida; Saint Louis, Missouri. After leaving Lowe’s, he began working at Easter Seals Midwest as a Community Living Specialist which assisted and took care of individuals in the autism spectrum. He loved working with his assigned individuals with special needs. Michael became the proud father of Myia Tanisha Haynes on March 4, 2015. She was the sparkle and joy of his life. In 2020, Michael was diagnosed with a rare-brain disease. This was not Michael’s first battle with health issues. He was born with a birth defect where cysts formed under his tongue and caused it to be slightly enlarged. That did not stop him from his accomplishments, living his life or anything his heart desired. Through it all, he always remained humble and never complained. Michael transitioned his Earthly home to his Heavenly home on Wednesday, July 28, 2021 at the very young age of 35. With the two women who loved him unconditionally, his mommy and sister, Davisha who both were at his bedside holding his precious hands. They were his backbone and cheerleaders whom he loved and adored more than life itself. Michael and Davisha had a special bond; they were best friends and confidants. Though he had a special bond with his sister Davisha, he loved his other siblings, Mariah and Brandon. Michael shall be remembered for his smile, playful and cheerful personality, creativity and the PRANKSTER he was. He LOVED dancing and was known by his friends as the life of the party. OMG, did Michael love food! If you knew him you would know he loved to eat. At family gatherings, we would get on him about how much food he had on one plate. He’d have so much food, you couldn’t recognize what all was on his plate. Above all things, his passion was music. He could play multiple instruments but enjoyed and loved playing the drums more than anything. He was the 2nd chair in his high school drumline. Michael was talented that he taught himself how to play the keyboard and not only that, he made beats. Michael is preceded in death by his maternal grandmother, Sallie Jackson, whom he loved dearly; one niece, Rayne White and great-grandmother, Lula Haynes. Michael A.K.A. “Mike” to his cousins were special to him and they will miss him dearly, Anthony, Bernitta, Keynishila, Crystal, AJ, Jveon, Kanyae, Nijah, Jayd’n, Aniyah, Anthony Jr. Michael had a close bond with all of his cousins, but a deeper bond with AJ whom him confided in, partied with and looked out for him. Michael will be fondly remembered by: his mommy ~ Marian Guest of Saint Louis, Missouri and father ~ David Haynes of Chicago, Illinois; daughter ~ Myia Haynes of Saint Louis, Missouri; two sisters ~ Davisha Haynes of Pensacola, Florida and Mariah Haynes of Chicago, Illinois; brother ~ Brandon Daniels of Chicago, Illinois; grandmother ~ Edna Haynes of Chicago, Illinois; uncle ~ George L. Williams; aunt ~ Beverly Gooden of Saint Louis, Missouri; great-aunt ~ Evelyn Haynes of Chicago, Illinois; niece ~ Alaijiha Smith; two nephews ~ Anthony Smith and Ramari White of Pensacola, Florida; his special cousins named above and a host of family members, friends whom loved him dearly. Michael loved and was loved. Let us not be sad but relieved in knowing that he is at peace. Let us find comfort in the unforgettable and cherished memories that we shared with him.

Michael was born on June 2, 1986 to the union of military parents, Marian Guest-Haynes and David Haynes in Santa Ana, California. Michael being a military child raised by his mother, who he always called &#8220;Mommy&#8221;, was able to travel... View Obituary & Service Information

The family of Michael Torrence Haynes created this Life Tributes page to make it easy to share your memories.

Send flowers to the Haynes family.