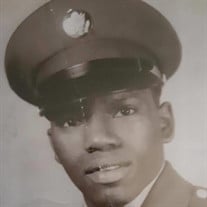 Nelson Williams, Jr. “Pud”, was born August 3, 1942 to Nelson Williams, Sr. and Mary Ellen Spears at the County Hospital in Clayton, Missouri. He was the oldest of nine children. His parents both preceded him in death. At the early age of thirteen, Nelson accepted Christ and became a member of Mt. Olive Baptist Church located in Ferguson, Missouri. As a little boy, Pud enjoyed spending time with his family - mainly his cousins and he had a lot to choose from. They would go fishing, school dances and other simple things around the neighborhood. He loved to visit Meacham Park in Kirkwood where his beloved maternal grandmother, Julia Jolly, resided. After graduating from Ferguson High School in 1961, he enlisted in the Army where he served four years in the Vietnam and Korean Wars. During his time spent in Vietnam, he earned Good Conduct Medals, The Vietnam Campaign Medal with Device, as well as the Driver and Mechanic Badge. Once he received an honorable discharge, he continued to work throughout his years until retirement as the owner of his own cleaning service. Pud was a very kind person, never had an enemy and would give you his last dollar. He loved the summertime because he enjoyed being outside barbequing and the comradery the gatherings would bring. For his entertainment he would enter dance contests and ride his motorcycle with friends and cousins. He had a smile that we’ll never forget and of course his laugh was contagious! When asked what he enjoyed most about his life, he would always say, “his grandkids”. God dispatched His angels to bring Pud home on April 1, 2021. Nelson married his first wife and to this union had four children: William Lynn Williams, Sonjia Guyton (Henri Guyton), Yolanda Marie and Mutazz Diab (Arthur Williams). He married his second wife Terry and to this union had two daughters: Courtney Harper (Walter Harper) and Sidney Williams. His children, William and Yolanda, preceded him in death. He is also remembered in love by his eight siblings ~ Teresa Williams, Delores Williams, Darryl Starks, Cheryl Lee, Lewellyn Williams, Marlon Tyrone Williams, Kathy Perry and Kimberly Manuel; fourteen grandchildren ~ Brooke Loren Stevens (Bryan Stevens), Jarett Strode, Jocelyn Holley, Lauren Holley, Jordan Frazier, Joseph Williams, Jackson Williams, James Williams, Evonni Williams, Dakarian Williams, Chandlyn Williams, Kane Boyd, Hailee Harper and Asher Harper; nine great grandchildren ~ Aaron, Julia, Aaliyah, Ayana and Jada Ocasio, Jayce Acklin, Mila “Mimi” and Kai Stevens and Adele Williams; and a host of family and friends.

Nelson Williams, Jr. &#8220;Pud&#8221;, was born August 3, 1942 to Nelson Williams, Sr. and Mary Ellen Spears at the County Hospital in Clayton, Missouri. He was the oldest of nine children. His parents both preceded him in death. At the early... View Obituary & Service Information

The family of Nelson Williams Jr created this Life Tributes page to make it easy to share your memories.