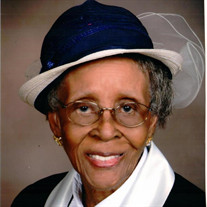 Ophelia Williams was born on January 12, 1921 to the late Roxie Holmes and Zachary Shelton, Sr. in Osceola, Arkansas. Ophelia has one brother, Zachary Shelton, Jr., who preceded her in death. Ophelia’s family moved to Alton, Illinois when she was seven years old. There, she attended Alton Public Schools and graduated from Alton High School. She was a long dedicated member of St. James Baptist Church in Alton, Illinois. Ophelia attended Scotia’s School of Beauty Culture and became an excellent beautician, acquiring many clients. A family friend built an addition to her mother Roxie’s home where she could practice and home her beautician skills. During WWII, Ophelia worked at American Steel Foundry in Granite City, Illinois as an assembly technician. Ophelia applied for employment at Alton State Hospital which required a test, which she passed with flying colors. She began work at Alton State Hospital as an Occupational Therapist. She soon became Activities Director and retired from the Illinois Department of Mental Health as Mental Health Specialist. In 1956 she married Ralph Williams, Sr., who preceded her in death, and to this union one child was born, Ralph Williams, Jr. Ophelia joined Mt. Sinai Baptist Church and became a devout usher and Mother Board member. After Ophelia’s retirement, she really enjoyed traveling, visiting the sick and shut in family and church members, and playing bingo at the Clyde Jordan Senior Center. Ophelia was an avid supporter and past president of East St. Louis and Vicinity Council of Clubs. She loved arts and crafts, sewing and crochet. She was very skilled, from refurbishing wood and furniture to wallpapering a room. Ralph Jr. mentioned how she taught him how to lay carpet, plant and maintain a garden, plants, flowers, amongst her many talents and gifts. Ophelia was always willing to help someone in need and give a ride to an event when she could. She was a most gracious host. She always provided a welcoming home. She was a loving mother and tenacious grandmother. Ophelia leaves to cherish in her loving memory: her son ~ Ralph Williams, Jr.; four grandchildren ~ Dalila (Tim) Conaway, Jameal (Tammy) Williams, Uriah (Valecia) Williams and Kamar Williams; eight great grandchildren; a close cousin ~ Darryl McGhee and Delphine McGhee; two special friends ~ Bob Brown and Quintella Calvert; and a host of cousins and friends.

Ophelia Williams was born on January 12, 1921 to the late Roxie Holmes and Zachary Shelton, Sr. in Osceola, Arkansas. Ophelia has one brother, Zachary Shelton, Jr., who preceded her in death. Ophelia&#8217;s family moved to Alton, Illinois... View Obituary & Service Information

The family of Ophelia Williams created this Life Tributes page to make it easy to share your memories.