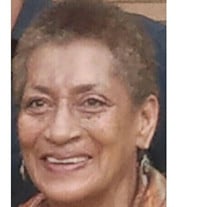 Pamela Louise Foxworth was the second daughter born to Robert and Kayte Foxwworth. She was born January 27, 1948. She a$ended St. Louis Public Schools. A&er her gradua'on from thepublic school system, she enrolled at Harris –Stowe Teacher’s college. Pam was a vibrant conversa'onalist and entertained her family with many hilarious stories. Sheenjoyed conversing with people and her anecdotes engaged people in a way that all the par'es enjoyed the exchange.Prior to moving to Detroit Michigan, she competed in tennis tournaments locally and na'onally. She a$ended Ascension and Trinity Episcopal churches with her family.Pamela resided in Detroit for over 30 years. During that 'me she held jobs as a legal secretary. Pamela le& this world on February 26, 2016.Pamela was preceded in death by one sister Lisa Jeane$e Foxworth in 1993, her father Robert in1998, and her mother Kayte in March of 2012. She will be deeply missed by her family members: her sisters Anita and Kathy, her brothers, Earle, Kha'b Waheed, Bruce and Keith, her sisters’ in-law Lore$a Waheed, Geri Foxworth and Theresa Foxworth. In addi'on, her nieces and nephews: Stephanie Foxworth-Wilson, Changa Foxworth, Candice Foxworth, Terrell Spencer , Dalilah Waheed Spencer, Jabari and Mariama Waheed, Beverly, Evere$e and Darris Foxworth: her grand nieces and nephews: Jus'n Smith, Milo and Miles Wilson; Brooke Foxworth, Zion, Zuri, and Ezechiel Spencer join us in our grief. Although she saw them infrequently, her cousins will miss her also.Though her family members will grieve her passing for many years to come, they wish her peaceand love and the comfor'ng presence of Allah.

The family of Pamela Louise Foxworth created this Life Tributes page to make it easy to share your memories.

Pamela Louise Foxworth was the second daughter born to Robert...

Send flowers to the Foxworth family.