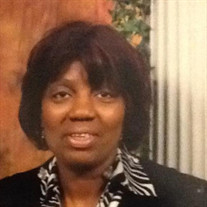 Patricia Ann Mister was born on November 8, 1956 in Chicago, Cook County, Illinois to Emma Anderson and her Father preceded her in death. She moved to Greenville, Mississippi and accepted Christ at an early age at Mount Pleasant Baptist Church... View Obituary & Service Information

The family of Patricia Mister created this Life Tributes page to make it easy to share your memories.

Send flowers to the Mister family.