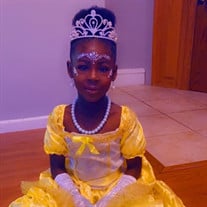 Princess Peyton entered her debut on December 10, 2014 to RoShonda Golden and Jerrick Ellis at Barnes Jewish Hospital. Princess Peyton was a quiet joyful person, she brought joy to everyone she encountered. As a princess she enjoyed all the fashion and glamour of being a princess. That's how she received the name "Glambaby PeyPey". As Princess Peyton enjoyed her life being mommy and daddy’s princess, she never forgot about being a big sister, living her best life running and playing dress up. Oh! lets not forget about her ambition for dance, gymnastic and ballet; with that being said her ambition is what lead Joye Forrest, who is a dancer, ballerina, a former Los Angeles Lakergirl and Ms. Missouri to invite Princess Peyton to COCOA, where she was taught how to do ballet. You had to be there to see the happiness in her eyes. Overall, she was the life of the ball. Peyton received her education from Confluence Academy South, where she had completed the first grade and been promoted to the second grade. On May 24, 2022, Princess Peyton succumbed to her injury at home. Peyton has moved to her eternal castle, where she has joined part of her royal family who preceded her in death, her great-great grandparents Ronnie Morris, Betty Bush, Lola Foster, Robert Ellis, Sr., Veola and Irvin Underwood, Sr.; three great grandfathers, Irvin Underwood, Jr., Carl Jones and Wardell Smith; two great uncles, Donald and Michael DeaVault; two uncles, Anthony Jones and Julius Smith and one cousin, Brianna Jones. She leaves her honorable memories to be cherish to: her parents ~ RoShonda Golden and Jerrick Ellis; one sister ~ Hailey Golden; one brother ~ Kameron Golden; three aunts ~ Chentl', Jameisha and Ke'Asia; eight uncles ~ Romaro, Jamel, JaMont, Ronnie, Maurice, Octavis, Ny'Aire and Chase; grandparents ~ Tiffaney Jones, Crystle Ellis Jordan (Randy), Ronnie Golden and Eddie Smith; great grandparents ~ Dorothy DeaVault (Spencer), Elosie Golden, Julia and Lee Sesson and Jessie Jordan; and a host of aunts, uncles, cousins, other relatives and friends

Princess Peyton entered her debut on December 10, 2014 to RoShonda Golden and Jerrick Ellis at Barnes Jewish Hospital. Princess Peyton was a quiet joyful person, she brought joy to everyone she encountered. As a princess she enjoyed all the... View Obituary & Service Information

The family of Peyton Marie Golden created this Life Tributes page to make it easy to share your memories.

Princess Peyton entered her debut on December 10, 2014 to RoShonda...

Send flowers to the Golden family.