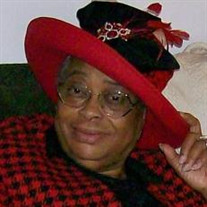 Queenia “Queenie” Mae Barbee, 78 of Springfield, Illinois passed away peacefully on December 22, 2021. She was born March 4, 1943, in Henning, Tennessee to Israel Williams Sr. and Rosie Mae Green Williams. She married the love of her life, Major Wyman Barbee on July 26, 1963. She was preceded in death by her parents, her beloved husband, as well as three sisters, Daisy, Mildred and Idelia; and two brothers, David and Israel Jr. Queenia was the sixth of fifteen children. She was a natural-born leader and force of nature. She performed many selfless acts of service and leadership throughout her life, starting at a young age. When she was just seventeen years old, she became the primary caregiver to her eight younger siblings, including her newborn sister Shelbra, after their mother passed away unexpectedly in 1960. During this period she continued to attend Lauderdale High School in Ripley, Tennessee and graduated in 1961. After marrying her husband, Major, they relocated to Springfield, Illinois to start a new life, three months after they wed. Soon after, all the younger siblings that she had helped raise decided to join her there. Leaving the South provided her and Major with better opportunities and they quickly started building a solid foundation for their family. Queenia was employed by the Illinois Department of Central Management Services (CMS) as an Account Tech III for twenty-eight years before retiring in 2001. Major was employed by Fiat-Allis for twenty-three years and the City of Springfield for sixteen years before retiring in 2002. Queenia was a dedicated member of Pleasant Grove Baptist Church and enjoyed singing in the choir. Along with singing in the choir, she also enjoyed attending Bible Study and Sunday School. She had many friends there and loved the church community. She loved cooking and baking, and she could win anyone over with her famous Sweet Iced-Tea. As much as she loved cooking, she loved bringing her friends and family together for big Sunday dinners. Among Queenia’s most admirable qualities, was her ability to provide good advice and support to family and friends. She was a motherly figure to many and had a one-of-a-kind personality. She was a fierce defender of those she loved and one of her favorite jokes illustrating that was, “If you ever see me fighting with a bear, you better be sure to help the bear!” The memory of her tough but nurturing spirit will be cherished by all her friends and family for the rest of our lives and we’ll remember her as an extraordinary example of how to put your family first, and how to treat others with kindness, love, and respect. She leaves behind the following family and a lifetime of memories that we’ll cherish: two daughters ~ Beverly and Jodi of Springfield, Illinois; a son ~ Dexter Sr. of Texas; ten grandchildren ~ Parker (Marcus) of California, Shyla, LaQuisha, and Jodeci all of Springfield, Anaz, Dexter Jr. and Bishop all of Tampa Florida, Brianna, Roderick, and Sequohya, all of Houston, Texas; six great-grandchildren ~ Anastasia, No’ell, Israel, Malaysia, (DJ) Darrell and Journi, all of Springfield; one god-daughter ~ Diamond; five sisters ~ Ida M. Pilgrim of Memphis, Tennessee, Gase Tyler, Minnie B. Williams, Linda J. Bailey, and Shelbra R. Williams all of Springfield; four brothers ~ George Williams of Chicago, Illinois, Lee Edward Williams, Leroy (Monica) Williams, and Napoleon Williams all of Springfield; seven sisters-in-law, three brothers-in-law and lots of cousins, nieces, nephews and many friends.

The family of Queenia M. Barbee created this Life Tributes page to make it easy to share your memories.

Send flowers to the Barbee family.