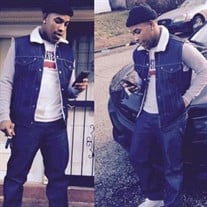 Randy Kenton Diltz, lll, a.k.a FatRan, was born a KING in St. Louis, Missouri to Randy Diltz, Jr. and Latrice Ledell on January 18, 1999. He was preceded in death by his grandmother, Yu Linda Sturdivant, whom he longed to meet his entire life. He was also preceded by great grandparents, William [Jennie Mae] Diltz and Author James. Randy attended Adams Elementary Bbefore he soon found his KIPP family. Randy would proudly announce, “when I get rich, man I’m giving back to KIPP”. Special thanks to his KIPP family, for teaching him how to apply himself and bringing out his strengths. There after, Randy graduated an honors student from NJROTC High School, where he was given several recognitions for his academic and athletic abilities, including his attendance at the 2014 and 2016 Scholar’s Athlete Luncheon. He then proceeded his educational career at The University of Central Missouri, where he astonishingly made the Dean’s list his first semester, with a whooping 4.0 GPA. Randy had a gentle, beautiful and genuine heart and soul. He enjoyed music of all genres, even contributing a few songs of his own. He enjoyed eating foods with no cheese, with the exception of pizza, nachos and lasagna, but he loved chicken and potatoes. Most importantly, he adored anytime spent with daddy, momma, family and friends. He has always owned a shy personality, but once he’s comfortable around you, you might as well call him KING Macho Man Randy Savage. He even had a college professor acknowledge him by that name. Randy has always remained persistent with his love, throughout life. He leaves to cherish his life and is survived by: his parents ~ Randy [Crystal] Diltz and Latrice [John] Jones; his grandparents ~ Randy Diltz Sr., Clifton Johnson, John and Doris Ledell; his great grandmothers ~ Sylvia Brown and Irene Johnson; two special uncles ~ Steven Johnson and Kenton Diltz; and a special aunt ~ Roszell Johnson (Poopie). Randy also leaves to cherish his special friend ~Daisha Carrawell~ and a host of other beloved uncles, aunts, cousins and friends.

Randy Kenton Diltz, lll, a.k.a FatRan, was born a KING in St. Louis, Missouri to Randy Diltz, Jr. and Latrice Ledell on January 18, 1999. He was preceded in death by his grandmother, Yu Linda Sturdivant, whom he longed to meet his entire life.... View Obituary & Service Information

The family of Randy Kenton Diltz III created this Life Tributes page to make it easy to share your memories.

Send flowers to the Diltz family.