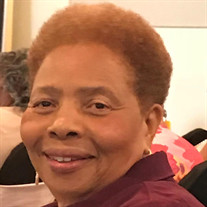 Rebecca Crump was born on July 6, 1945 in Isola, Mississippi and was eleventh of fifteen children born to George Washington Henry and Isabella (Fluker) Henry. “Becky”, as most of family and friends knew her by, was also a twin to Redessia Robinson. Preceding her death are her parents, George and Isabella Henry; her brothers, Charles Henry and G.W. Henry and sisters, Bertha McClure, Cassie Oglesby, Queen Esther Milon and Willie Pearl Henry. The Henry family relocated to South Bend, Indiana when she was a young girl. Becky attended and graduated from Central High School. Rebecca attended Faith Temple Church of God in Christ, where she professed her love of Christ as her savior. Rebecca worked at St. Joseph Hospital and worked many years at Bendix Corporation, an American Manufacturing and Engineering Company. Relocating to Saint Louis as a young woman, she began working at Boeing, formerly McDonnell Douglas, she worked a skilled sheet metal laborer. Becky retired in December 2014 with thirty-five years with Boeing. She joined in Holy Matrimony to Charles Crump, Sr. in January 1977. To this union one son, Charles J. Crump, Jr., was born. Rebecca also had one granddaughter, Anya Rebecca Crump and one grandson Charles “Trey” J. Crump, III. Becky loved being a mother and grandmother. Rebecca played so many roles in her life. She loved listening to her Blues and spending time with her family and friends and she loved football as she cheered for The Kansas City Chiefs. The holidays gave her some much joy and Becky would be the one first to say, “let’s play some cards!” Over the years, she took many trips back to South Bend, Indiana, San Jose, California and Macon, Georgia to visit her siblings and to Arkansas with her extended family. During her retirment she enjoyed lunches with her Boeing family at The Cheesecake Factory or sometimes head across the river to Josephine Tea Room in Godfrey, Illinois with family or friends. She was so full of life! She leaves to cherish memories: a son ~ Charles “CJ” Crump, Jr.; granddaughter ~ Anya; grandson ~ Trey; two sisters ~ Redessie Robinson (Becky’s twin) and LaVarghn Hurt; six brothers ~ John Henry, George Henry (twin to G.W), Robert (Sonny) Henry, Elliott Henry, Eugene Henry and Connie Mack Henry; and a host of friends, nieces, nephews and cousins of the Henry, Walker and Crump family.

Rebecca Crump was born on July 6, 1945 in Isola, Mississippi and was eleventh of fifteen children born to George Washington Henry and Isabella (Fluker) Henry. &#8220;Becky&#8221;, as most of family and friends knew her by, was also a twin to... View Obituary & Service Information

The family of Rebecca Crump created this Life Tributes page to make it easy to share your memories.

Send flowers to the Crump family.