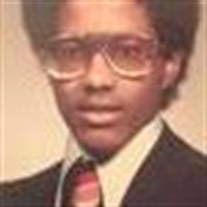 Reginald David Hensley was born on August 31, 1961 to the proud parents, Robert Lewis Hensley and Annette Yvonne Hensley in Saint Louis, Missouri. Reggie loved the Lord and was baptized at Antioch Baptist Church in Fulton, Tennessee. He also enjoyed visiting a number of churches throughout St. Louis Metropolitan areas. Reggie loved his family dearly. He was truly our organizer, especially when it came to a family member’s birthday celebration. He would routinely call to remind the entire family, day or night, to ensure that we acknowledged each other’s birthday. Reggie was one of a kind!!! And when it came to hosting the Hensley’s Super Bowl or Fight parties, he would entertain and cater to every person ensuring that they were having a great time. Reggie enjoyed watching sports, soap operas, classic cowboy movies, washing cars, fishing, listening to soul music and of course indulging in a beverage of choice from time to time. Reggie was a very friendly kind-hearted person, and when it came to serving his community and the Senior Adults of Velda City, nothing was more rewarding. He would often deliver Thanksgiving dinners and Christmas baskets. He would assist with all the set-ups for the special events held at Velda City, City Hall. Reggie was educated in the St. Louis Public Schools and graduated from Normandy High School 1979. He began working in a number of different professions as a young man, which led to business ownership as a successful lawn care service for over 30 years. Reggie departed this life Tuesday, December 26, 2017 and will be greatly loved and missed by so many, forever. His mother, Annette Yvonne Hensley, grandfather, David Hensley, and grandmother, Lillian Hensley all preceded him in death. Reginald David Hensley leaves to cherish his memory to be cherished by: his father ~ Robert Lewis Hensley; sisters ~ Robinett Hensley, Lanelle Jackson, and Kakneka Thames; brother ~ Robert David Hensley; sons ~ Lamar Elliott, and Cameron Hensley; niece ~ Chelsey Hensley; and the entire Hensley family.

The family of Reginald David Hensley created this Life Tributes page to make it easy to share your memories.

Send flowers to the Hensley family.