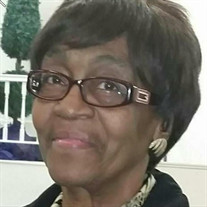 Mother Retha Mae Ware was born on February 13, 1939 to the union of Johnny and Veola Welch, in Chidester, Arkansas and was one of fifteen children. She was preceded in death by both of her parents, ten siblings and son, Leon Jr. She married at a very young age, to this union three children were born Vanessa, Leon Jr. and Melloniece. Mother Ware’s daughter, Vanessa Pryor was on a 40-day consecration. Her heart’s desire was to see her mother confess a hope in Christ. Prior to the end of consecration, she received a call from Mother Ware stating she had received the Lord as her Savior; after receiving Christ she joined Deliverance Temple Church of God in Christ under the leadership of Bishop Bobby Warren. She subsequently transferred her membership to Love Feast Church of God in Christ under the leadership of Elder Clarence Harris. She absolutely loved her Pastor and church family. She was a dedicated and faithful member of that Ministry. Her favorite aspect of the Ministry was Sunday School. She often would provide transportation for some of the Saints to church. She would make it very clear that they must be ready on time as she did not want to be late. She always came prepared for service, she would pack a bag containing her Bible, snacks and Tambourine. Mother Ware served at her church. She loved children and the children loved her, as she could be counted upon to always have candy in her bag. The children would make sure that they greeted Mother Ware during church services so that they would receive a piece of candy. She volunteered several times a week at the church, helping in the kitchen, the daycare and wherever she was needed. She could be counted upon to serve. She retired from Amtrak in 2001. Post retirement she did not stay home and relax she continued to serve. She was known for making delicious Sweet Potato Pies and melt in your mouth Pound Cakes. She would get numerous requests from people to make these delicacies. Whenever her siblings became ill, she ministered to them in many capacities of help to provide care for them during this time of need. Despite her advancing age, Mother Ware continued to be active. She loved to take long walks, engage in physical exercise and participate in the Silver Sneakers Programs. She actually won several awards for walking competitions and spearheaded exercises classes. She was an advocate for fitness. She loved her girls dearly, so much so that she gave them nicknames. Vanessa was called “Peaches” and Melloniece was called “Lover”. She instilled within her girls the desire to become strong, spirit filled, independent women. However, if she felt as if someone was not treating her girls appropriately, she would give them a certain look. Even though she may have been small in stature, had a big heart, and was known to be feisty, she did not play when it came to her girls. Although she did not have biological grandchildren, Vanessa adopted a baby girl by the name of Aquaia. Mother Ware cherished this child as her one and only grandchild and staying true to form, gave her the nickname of “Pooh”. Mother Ware would unofficially adopt many more special grandchildren namely, Lawrence Haynes, Kim Hill, Carmen Lugo and Ouida Richardson just to name a few. On September 15, 2021, The Lord decided that Mother Ware’s work on Earth was complete and the Lord called her home. She leaves to Cherish her memory: two daughters ~ Vanessa Pryor from Belleville, Illinois and Melloniece Pryor from Gary, Indiana; three sisters from Atlanta, Georgia ~ Mrs. Vera Flournoy, Mrs. Bettye Emory and Mrs. Ernestine Murray (NE: Ernie-preceded in death); one brother ~ James Welch (NE: Rose) from Hobart, Indiana; two lifelong friends ~ Ms. Louise Edwards and Mrs. Gladys Peterson and a host of nieces, nephews including great nieces and nephews, cousins and friends

Mother Retha Mae Ware was born on February 13, 1939 to the union of Johnny and Veola Welch, in Chidester, Arkansas and was one of fifteen children. She was preceded in death by both of her parents, ten siblings and son, Leon Jr. She married... View Obituary & Service Information

The family of Retha Ware created this Life Tributes page to make it easy to share your memories.

Send flowers to the Ware family.