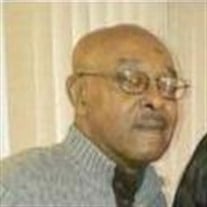 Richard Wayne Cherry was born on August 25, 1946 in St. Mary’s Hospital to George C. Cherry, Sr. and Myrtle Mayhew Cherry in St. Louis, Missouri. Both parents and older brother George C. Cherry, Jr. preceded him in death. Richard grew up in the historic “Ville” area. He enjoyed swimming, wrestling and playing tennis at the Tandy Center and park. He attended Turner Elementary and graduated from Sumner High School in 1964. Richard Wayne married his high school sweetheart, Astra Davis in 1967. To this union was born one daughter, Angela Richelle Cherry. On September 9, 2017, Richard and Astra were blessed to celebrate 50 years of marriage. He accepted Jesus Christ at an early age while attending St. James A.M.E. Church. Richard and Astra loved to skate, dance and were bopping champs. Richard’s personal favorite past time was playing Poker (“dealer’schoice-deuces-are-wild”) and Tonk with his buddies. He also enjoyed driving his Yukon truck while listening to Jazz or Blues. Richard knew the ends and outs of professional sports. He loved to dress and was fashion conscious however, didn’t give into fads or trends. Levine hats and baseball caps were always a part of his accessories. Richard worked many hard years at Lincoln McNeil St. Louis, Engineering. He retired at age 55, loved it and vowed never to work again! Doctors, nurses, and caregivers described Richard as steadfast, cooperative and a pleasant patient. However, after many months of battling his illness, on Tuesday, December 5, 2017, Richard’s battle ended while at home with his wife by his side. He leaves to cherish his memory: his wife ~ Astra; daughter ~ Angela (Kanzi); granddaughters ~ Tylar and Anaya; grandson ~ Kanzi Jeremiah (K.J.); sisters-in-law ~ Brenda Cherry, LaRita Renee Johnson and Alriana Bonita Maufas; two goddaughters nieces, nephews, great nieces and nephews, great-great nieces and nephew, a host of cousins and close friends.

The family of Richard Wayne Cherry created this Life Tributes page to make it easy to share your memories.

Send flowers to the Cherry family.