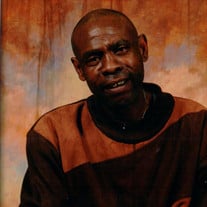 Ronald Edward Brown was born on September 4, 1951 in St. Louis, Missouri to the late Mr. John E. Brown, Sr. and Mrs. Annie F. BrownEdwards. Ronald was the third oldest born of nine children to their union. His parents preceded him in death along with two brothers, John and Chester Brown, one sister-in-law, Shirley Brown, two brothers-in-law, LeRoy Roper and Deacon Keith Lee, Sr., two great nephews and one granddaughter, Ronisha Jackson. Ronald was educated in the St. Louis Public School System. Ronald had two children, a son, Ronald Jackson and a daughter, Diane Sanders. Ronald worked at Miss Hulling’s as a prep cook and assistant baker for twelve years until the business closed. Ronald worked carious jobs, until he started working for Aramark at Boeing Aircraft Company. He worked as a prep cook there until his illness. Ronald was old school to the heart. He loved wearing his Stacey Adam shoes. It didn’t matter the season or reason, you would find him wearing Stacey Adams. He was even old school when it came to music. He was a smooth dancer. He loved wearing Levine hats “The Brim”. Ronald had a few favorite foods which were cabbage, pinto beans and corn bread. He loved his sister Lynn’s chili. Back in the day, Ronald was a boxer; he had a powerful right hook, which gave him the nickname “Boscoe”. Ronald would help you in any capacity. He had a heart of gold. Ronald was an awesome Daddy. He loved his children, family and friends. Ronald just had a way of making you smile and laugh, even if you were having a bad day. He loved to joke around. Ronald and his siblings were very close. He was a very special brother whom everyone loved. Ronald leaves to cherish his memories: his son ~ Ronald Jackson; daughter ~ Diane (Anthony) Sanders; nine grandchildren; one brother ~ Alfred Brown of Kentucky; five sisters ~ Diane Ghee, Angela Roper, Linda Graham (James), Carolyn Hopson (Clifford) and Tanjlia Lee, all of St. Louis, Missouri; three aunts ~ Christine Holmes, Juanita Hicks and Leola Mayhew, all of Chicago, Illinois; and a host of nieces, nephews, great nieces and nephews, cousins, other relatives and friends.

Ronald Edward Brown was born on September 4, 1951 in St. Louis, Missouri to the late Mr. John E. Brown, Sr. and Mrs. Annie F. BrownEdwards. Ronald was the third oldest born of nine children to their union. His parents preceded him in death along... View Obituary & Service Information

The family of Ronald Brown created this Life Tributes page to make it easy to share your memories.

Send flowers to the Brown family.