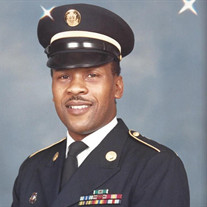 Ronald was born to Cleola and Johnny Dudley on June 7, 1954. His father preceded him in death. Ronald was educated in the St. Louis Public School District. Ronald served in the United States Army from 1975 to 1992 with a year and a half... View Obituary & Service Information

The family of Ronald Mason created this Life Tributes page to make it easy to share your memories.

Send flowers to the Mason family.