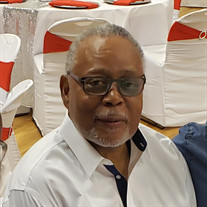 Order of Service Chapel of the Cross-Lutheran Church 1645 BENHAM ROAD ♦ SAINT LOUIS, MISSOURI 63136 PASTOR CLIFFORD BISCHOFF ~ OFFICIATING SATURDAY, DECEMBER 21, 2019 ~ 11:00 A.M. MUSICAL PRELUDE RYAN MEYERS, ORGANIST “WINGS OF EAGLES” ENTRANCE PROCESSIONAL MEDITATIONAL AND LITURGY OF THE WORD PSALMODY PSALM 23 SCRIPTURE READING OLD TESTAMENT READING ISAIAH 25:6-9 NEW TESTAMENT READING 2 TIMOTHY 4:6-7 GOSPEL READING JOHN 14:1-7 MUSICAL SELECTION HYMN #801 “HOW GREAT THOU ART” SERMON APOSTLES’ CREED PRAYERS ACKNOWLEDGEMENT OF CARDS, TELEGRAMS AND CONDOLENCES READING OF LIFE LEGACY SOLO MUSICAL SELECTION “I CAN ONLY IMAGINE” REMARKS BY FAMILY LORD’S PRAYER BENEDICTION RECESSIONAL Interment ST. PETER’S CEMETERY 2101 LUCAS AND HUNT ROAD ♦ SAINT LOUIS, MISSOURI 63121 Repast PRIVATE The Legacy of a Trailblazer Ronald Garland Sherod lived his life as a Trailblazer. His accomplishments and contributions are many. He broke many barriers and was a pioneer that did not boast or brag nor settle for mediocrity. He leaves a remarkable legacy as an attorney, a businessman, community advocate, a man who accomplished many “firsts”, with a quiet grace and dignity, he paved the way for others to follow. Ronald Sherod was born on September 14, 1947, in Saint Louis, Missouri to the late John and Jean E. (Newsome) Mosby. In his early teens, he was adopted by his stepfather, John Sherod and his name was officially changed to Ronald Sherod. Ron received his early education in the Saint Louis Public Schools until the family relocated in the early 1960s to Hazelwood, Missouri, where he integrated the Hazelwood School District and was the first African American to graduate from Hazelwood High School. Ron earned a B.S. in Business Administration, a Master in Business Administration and a Juris Doctor, all from Washington University in Saint Louis. Ron completed a three year law degree and a two-year MBA simultaneously in four years. Ironically, he passed the Missouri Bar exam and was licensed to practice law prior to graduating from law school. Ron was baptized in late 1950, received his first communion at Mount Calvary Lutheran Church and served as an altar boy. He transferred his membership in 1983 to Chapel of The Cross Lutheran Church, where he remained until his Heavenly transition. On March 1, 1969, Ron married Lorraine Patricia Peals. Ron and Pat were married for twenty-eight years. They had one son, Jonathan (Alicia) and three grandchildren, Andre Hester, Mason Sherod and Xavier Sherod. Ron married Michelle Thornton-Thompson on May 25, 2002. Ron had a distinguished professional career. Early in his career, he worked in the finance industry. Initially working for Goldman Sachs and later for First National Bank of Saint Louis. He switched focus and practiced law with the firm of Attorney Frankie Freedman. He later became the first and only African American to head the Saint Louis Public Defenders office. Ron was able to finally combine his passion and love for the law and his love for finance when he joined A.G. Edwards and Sons (later named Wells Fargo). He developed a national reputation as a “Deal Closer” as he climbed the ranks and eventually headed the entire unit as Senior Vice President and Director of the Affluent Client Planning and Key Client Solutions Group. Retiring in 2015, he later became General Counsel at ALL Solutions, Inc., a firm owned and operated by his wife, Michelle. Ron was an active member of the Saint Louis Community. Early in his career, he served as Administrator for the Citizens Committee on Saint Louis School Integration. Not only was he a financial contributor to many charitable organizations, he voluntarily offered his legal expertise to many, including the Jackie Joyner-Kersee Foundation and United Way. His most favored causes were in the field of education. He served on the Alumni Advisory Committee of the Washington University School of Law. Later, he was an officer and active member of the Black Alumni Association of Washington University, where he served on the Board of Trustees. Ron’s keen intellect and wisdom will be missed by all. He was the Patriarch of the Sherod family. He didn’t meddle, but was always willing to help family and friends solve problems and issues. A trusted counselor, his advice was always sound and practical. His guidance will be greatly missed. Ron departed this Earth on the morning of Monday, December 16, 2019. He was preceded in death by his parents and his sister, Jean Sherod Vance. Ron is survived by: his wife ~ Michelle; former wife ~ L. Patricia; his daughter ~ Ebony Sherod; his son ~ Jonathan and his wife, Alicia; three grandchildren ~ Andre, Mason and Xavier; two brothers ~ Paul Sherod and Darwin Sherod; his uncle and mentor ~ Stanley Newsome; his aunt ~ Rosie Newsome; and a host of nieces, nephews, cousins, many friends and relatives. In Lieu of flowers, memorial gifts in Ronald’s name may be made to: The Jackie Joyner-Kersee Foundation, 101 Jackie Joyner-Kersee Foundation, East St. Louis, IL 62204.

The family of Ronald Garland Sherod created this Life Tributes page to make it easy to share your memories.

Order of Service Chapel of the Cross-Lutheran Church 1645 BENHAM...

Send flowers to the Sherod family.