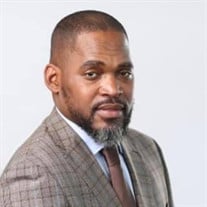 Ronnell was born on May 14, 1975 in St. Louis, Missouri to Reginald and Darlene Burns. He was raised in the Downtown area of St. Louis in Vaughn Housing Projects by his mother, father, aunts, and uncle. Ronnell was educated in St. Louis Public Schools, attended and graduated from Vashon High school where he was a part of the 1994 State Championship Basketball Team. Ronnell was very committed, ambitious, competitive, and had the attitude of a winner. Always striving for greatness. At a young age Ronnell committed his life to Christ and began to do the work of the Lord. He began to minister to everyone he could reach and those he touched throughout his early life. Ronnell continued in ministry as he began another chapter in his life as an insurance agent and financial solutions advisor. He committed close to 25 years of his life helping people make financial decisions that could help their families. He started a financial solutions company called “Legacy Financial Solutions” where he was determined to help people all over become financially independent and leave a legacy for their families. Ronnell was very successful in his business and his efforts to help families. He had four children of his own who he worked very hard for to create a legacy. He met his now wife, Keianna and the two of them merged their lives together through marriage on September 13, 2012. They brought their families together and their business minds and created something great that affected thousands of people. They started “6FigureAmbition” a company that afforded them the opportunity to continue to help families and create legacy’s. They also formed a beautiful family with their 8 children. Ronnell was a loving husband, a supportive father, a leader of men, a motivational speaker, a good friend, a great businessman, sometimes a singer/comedian in his past time. On Saturday, November 6, 2021 Ronnell departed from this life and transitioned to a life after. Ronnell leaves to cherish his memories: his children ~ Riyah Burns, Ronnell (RJ) Burns Jr., Riley Burns, Mekhi Combs, RaeHailee Burns, Jaicha Martin, Marianna Reed, and Raion Burns; grandchild ~ Malayiah Saalik; mother ~ Darlene Burns; father ~ Reginald Burns; stepmother ~ Martha Burns; siblings ~ Rashonda Burns, Clarence Burns, Reginald D. Burns, Latasha McGill, Tiyonda Valentine, Yolanda Jackson, and John Torrance; a host of aunts, uncles, cousins, nieces, nephews, friends, and business associates.

Ronnell was born on May 14, 1975 in St. Louis, Missouri to Reginald and Darlene Burns. He was raised in the Downtown area of St. Louis in Vaughn Housing Projects by his mother, father, aunts, and uncle. Ronnell was educated in St. Louis Public... View Obituary & Service Information

The family of Ronnell Dwight Burns created this Life Tributes page to make it easy to share your memories.

Send flowers to the Burns family.