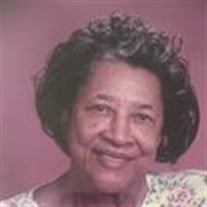 Rosie Lee Thurman was born in Greenwood, Mississippi to Hattie Green and Gordie Thurman on June 4, 1927. When Rosie’s mother died, she was raised by her grandmother, Laura Green. Rosie had two sisters, Ophelia and Mamie Lee, who preceded her in death in 2018. At a young age, Rosie’s family moved to Sikeston, Missouri and then to Saint Louis, Missouri. Rosie married Wellington Bardley on February 14, 1956. From this union came two children, Sharon Lee and Byron Jerome. In the early part of the 1960s, Rosie and her husband began studying the bible with a Jehovah’s Witness couple. They both dedicated their lives to Jehovah God and were baptized together at a convention in Memphis, Tennessee in 1966. They, along with the couple they studied with, enjoyed traveling to different states for the District Assemblies every year. After Rosie’s husband, Bill, died in the early 1980’s, she starting working to take care of herself and her teenage son. Rosie was a very quiet and shy person, but she was very courageous and bold when it came to her family and she did everything she could to help them, whether it was her children or grandchildren; they were always well taken care of. She always had a listening ear and a shoulder to cry on. She also loved Jehovah and even when she could not come to the meetings at the Kingdom Hall anymore, she hardly ever missed listening to those meetings by phone. She kept in touch with people on the telephone and it would not be too long before she was calling and checking on you. Rosie suffered a short illness and passed away on August 26, 2019. Her kind and quiet spirit will be deeply missed by all who knew and loved her. Rosie is survived by: her daughter, Sharon Hill (Joseph); son, Byron Bardley (Cynthia); one sister, Ophelia Carter; and her grandchildren, Niki, Marlon, Travon, Demetrius, Jamale and Alexxa. She is also survived by eighteen great grandchildren, with one on the way and eight great-great grandchildren, along with a host of nieces, nephews, cousins and friends.

Rosie Lee Thurman was born in Greenwood, Mississippi to Hattie Green and Gordie Thurman on June 4, 1927. When Rosie&#8217;s mother died, she was raised by her grandmother, Laura Green. Rosie had two sisters, Ophelia and Mamie Lee, who... View Obituary & Service Information

The family of Rosie Lee Bardley created this Life Tributes page to make it easy to share your memories.

Rosie Lee Thurman was born in Greenwood, Mississippi to Hattie...

Send flowers to the Bardley family.