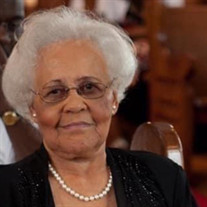 Sheila Adora was born on June 8, 1925 in Guyana, South America to Joseph and Florence Williams. She was the youngest of eleven children. Sheila fell in love with Ivan Alphonso Solomon and on August 7, 1943, they were married. This was a marriage “made in heaven.” This heavenly marriage conceived seven children Antoine Sr, Wilbur, Juliette, Beatrice, Miriam, David and Esther. Later in life, the Lord impressed upon them to have an eighth child, Jason, by adoption. Sheila worked alongside her husband as he was called to pastor several churches in Suriname, Guyana, and the United States. She was a model First Lady in all the churches her husband was pastoring. She was the queen of hospitality. She loved to entertain family, friends, and others. Her home was always open to guests passing through on their way to an assignment in another country or state. In 1968, Rev. Dr. Ivan and Sheila Solomon (along with their four younger children) accepted the call to the United States to pastor the Bibleway Church of the Nazarene in St. Louis, Missouri. Several years later, Rev. Solomon was called to pastor the Calvary Church of the Nazarene in Brooklyn, New York. The clarion call came again for them to return to Missouri to pastor the Wellston Church of the Nazarene - so they returned home to St. Louis. Sheila faithfully worked alongside her husband at the Wellston Church of the Nazarene, where the church family welcomed them back home. Sheila Solomon was an educator and dynamic businesswoman in her own right. She was the Founding Director of no less than four early childhood and elementary education centers in her lifetime. Upon arriving in the United States, she founded the Northwest Daycare Center and Christian School in St. Louis, Missouri in 1971, where she was Executive Director for twenty years. She was also the Founding Director of the Calvary Church of the Nazarene Daycare Center in Brooklyn, New York in 1981. Soon after her return to St. Louis in 1983, she subsequently went on to found the Calvary Daycare Center in South St. Louis and resumed her executive duties at Northwest Daycare Center and Christian School. A tireless and passionate educator, even into “retirement” she went on to found another small daycare center, Foundation Children’s Academy, in 1995 to fulfill an important need for educational based childcare for working parents in her community. She inspired many other women to pursue an entrepreneurial journey based on her stalwart perseverance, passion for early childhood education and ability to manage operational and final details critical for success in a heavily regulated industry. Sheila earned a Bachelor’s degree in Early Childhood Education and a Master’s degree in Ministry from Lael University. She was also a certified teacher. She was the recipient of several awards recognizing her entrepreneurialism and service to the community. She served the Church in countless ways, to name a few - Sunday school teacher, women’s ministry leader, Pastors’ spouses’ coordinator, keynote speaker at several women’s retreats and a host of other ministries. She was a Godly woman. She lived a life of prayer. Her mantra was “I am praying for you”. Mom was an example of Proverbs 31:29 “Many women do noble things, but she surpasses them all”. She was a worldwide traveler, blessed to visit Austria, Italy, London, Paris, Germany and all of the Caribbean Islands. Mom has left a legacy for her children, grandchildren, great grandchildren and great-great grandchildren. She received her heavenly call from the King of Kings and Lord of Lords at 4:12 a.m. on July 11, 2020. Mom leaves behind: her eight children ~ Antoine Sr., Wilbur, Juliette, Beatrice (Anthony), Miriam (Rawle), David (Judy), Esther (Jonathan) and Jason; twenty-two grandchildren ~ Dale Rodney (Alexis), Samuel Solomon (Gwendolyn), Travis Nurse (Anna), Steven Rodney (Tiffany), Tiffany Solomon-Stewart, Christine Robinson, Dwayne Nurse (Kris), Walter Solomon (Ginger), Gregory Nurse (Sarah), Antoine Solomon, Jr. (Josie), Esther Solomon, Keisha Futrell (Michael), Rima Solomon, David D. Solomon (Shawndell), Byron Banfield (Shoneka), John RamsaroopGraham (Dante’), Lincoln Banfield, Jr., Kristen A. Johnson, Esq. (Jelani), Jalessa Graham, M.D., Ashley McKoy (Anthony), Jordan Graham and Charlotte McCormick; fifty-one great grandchildren; four great-great grandchildren; nieces and nephews ~ Verna Goodridge, Jacqueline Williams, M.D., Monty Goodridge, Louise Cliff, Gordon Williams, Martin Williams, Marva Solomon, Joy Vigilance and Aubrey Solomon; and a host of Spiritual Sons and Daughters around the world especially ~ Kimberly Parker, who cared for her during the past weeks of her life.

Sheila Adora was born on June 8, 1925 in Guyana, South America to Joseph and Florence Williams. She was the youngest of eleven children. Sheila fell in love with Ivan Alphonso Solomon and on August 7, 1943, they were married. This was a marriage... View Obituary & Service Information

The family of Sheila Adora Solomon created this Life Tributes page to make it easy to share your memories.

Send flowers to the Solomon family.