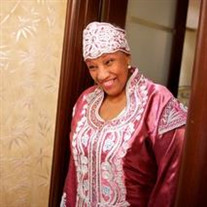 This is a life&#8217;s celebration of Shirley Ann (Massey) Hardieway Muhammad or Mother Hardieway as so many affectionately call her. Mother was born in Saint Louis 1934 from the union of Q B Massey and Carrie S. (Smith) Massey, members of Central... View Obituary & Service Information

The family of Shirley Ann Hardieway Muhammad created this Life Tributes page to make it easy to share your memories.

This is a life’s celebration of Shirley Ann (Massey) Hardieway...