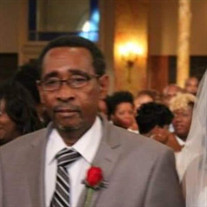 Thomas Lewis Perkins is the first born of Charles L. Perkins and Alberta E. Perkins. He was born on October 11, 1950. Thomas departed this life on March 22, 2021. He was seventy years wise. Thomas attended Beaumont High School in Saint Louis, Missouri. He enlisted in the U.S. Army in November of 1968, where he successfully completed training and became a Medical Corpsman. Thomas then served as a Medic during the Vietnam War, where Thomas would earn and receive multiple medals and commendations, such as the National Defense Service Medal, Vietnam Campaign Medal w/60 Device2 OS Bars, Silver Star Medal, Army Commendation Medal and Combat Medic Badge. After serving his country, Thomas would spend more than thirty plus years working for the City of Saint Louis with the STL Water Department. There he met many, trained some, mentored a few and helped as many as he could before retiring. Thomas loved to Barbecue!!! In his spare time, anytime and all the time. It didn’t matter whether it was Summer, Spring, Winter or Fall—Thomas loved grilling all year round. various work sites throughout the city of Saint Louis such as the STL Circuit Attorney’s Office, Ameren Union Electric, STL School locations and many events for the Saint Louis Water Dept. can attest to the love that Thomas put into all of his Queuing. His two sisters and niece often had the pleasure of witnessing other’s reactions to Thomas’ delicious, tender, fall off the bone BBQ with much pride. Thomas loved discussing politics and did so often with friends like Booker Brown. He also really enjoyed watching sports, all sports, especially football, basketball and baseball and often rooted for the home teams. Thomas would sometimes say of himself—“I know I am not perfect; I know who I believe in, I know who I pray to, I know who I confess my sins to, I know who I ask for forgiveness, I know who forgave me and set me free—I know who saved me, Jesus.” These words he again spoke on March 20, 2021. As a family we are grateful for the occasions that Thomas would join us in worship while visiting Shalom Church City of Peace, where Dr. F. James Clark is Pastor. He would later join Friendly Temple Church in Saint Louis City, under the leadership of Pastor Mike Jones. It was the spoken word of God heard in these spaces that led him to accept and receive Christ as his Lord and Savior. Glory to God in the Highest! On one occasion after hearing Pastor Clark deliver the word, he said “I felt as if the words/the sermon was speaking directly to me.” Imagine That. Unable to travel due to health issues, his brother Lonnie remarked how much he admired and respected his eldest brother. Lonnie had long since shared with Thomas years ago that he often wished he was half the man that Thomas was and as God as his witness for him those words still hold true today. As a family we are collectively grateful for the privilege and honor that it has been to know, love, support and care for the man known simply as our beloved Uncle Thomas. “We are confident, I say and willing rather to be absent from the body and to be present with the Lord.” 2 Corinthians 5:8 (KJV) Thomas Lewis Perkins was preceded in death by his parents, Charles and Alberta Perkins; brother, Herman Perkins; sister, Betty Joe Ford; and nephews, Herman Perkins, Joseph Jackson, Meco Ford, Garry Perkins and Jason Gray. Thomas leaves to cherish his memories: one brother ~ Lonnie Rashaed; four sisters ~ Kathleen McCray, Beverly Koloian (David), Debra Summers and Yvonne Perkins; sister-in-law ~ Audrey Payne Perkins; seven nephews ~ Troy (Karla), Samuel, James Thomas (Paige), Nicholas, Alex, Daniel and Wallace; ten nieces ~ Alberta Marie (Antonio), Mistani, Lena, Beverly (Shelton), Audrey Catherine, Vador, Hermanda, Tammy (Ramon), Tamara and Tiffany; and a host of great nephews and nieces.

The family of Thomas Lewis Perkins created this Life Tributes page to make it easy to share your memories.

Send flowers to the Perkins family.