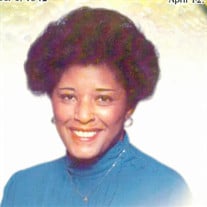 Trilla Mae Turner of St. Louis, Missouri (1942 – 2015), passed away peacefully on Sunday, April 12. Trilla was born to the late Edmond and Beatrice Wallace of Columbus, Mississippi. She was married to the late Chester Turner of Columbus, Mississippi. Trilla raised five children: the late Ivan Turner, Rhonda, Glynis, Lawrence and Cynthia. Trilla thoroughly enjoyed swimming and the outdoors. She learned to swim at the early age of eight and continued swimming throughout the rest of her life. Family was Trilla’s passion and she dedicated her energy on raising her children with delight and pleasure. She was a strong, independent and beautiful woman who instilled a sense of survival, endurance, prosperity and perseverance in all of her children, which resulted in a stellar group of individuals. Trilla was the quintessential matriarch of strength to her family and was the pillar of tough love to all the children in the neighborhood. One of her most unique traits was her captivating laugh that spread through the air like the smooth vocal sounds of one of her favorite singers, the late Ms. Minnie Ripperton. Trilla is survived by: Rhonda Natisse Turner of Atlanta, Georgia, Glynis Marie Sykes of St. Louis, Missouri, Lawrence Turner of St. Louis, Missouri and Cynthia Yvette Mallet of Seattle, Washington; fourteen grandchildren ~ Keeonon of St. Louis, Missouri, Lakeisha Natisse Johnson of Atlanta, Georgia, Justin Vincent Foster of Jersey City, New Jersey, Kierstyn Taylor Turner of Atlanta, Georgia, Reginald Kevin Garner, Jr. of Johnson City, Tennessee, Darius Perrian Garner of New York, New York and Derek Gregory Sykes of Atlanta, Georgia, Anthony Michael Mallet of Hawaii, Aaron Lawrence Mallet and Adrian Lamar Mallet of Seattle, Washington, Ashlynn, Azariah, Cierra and Ashanti; five great grandchildren ~ Azanae and Kyree Johnson, Jeiriah, Kelis and La’nya Nicole Garner. Trilla will be dearly missed by her daughters, Rhonda, Glynis and Cynthia, as well as her son, Lawrence, and a host of caring family members and friends.

Trilla Mae Turner of St. Louis, Missouri (1942 &#8211; 2015), passed away peacefully on Sunday, April 12. Trilla was born to the late Edmond and Beatrice Wallace of Columbus, Mississippi. She was married to the late Chester Turner of Columbus,... View Obituary & Service Information

The family of Trilla Mae Turner created this Life Tributes page to make it easy to share your memories.

Send flowers to the Turner family.