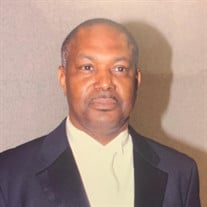 Willie Edward Bunch son of Ora V. Walls Bush & Joseph McCray was born on November 26, 1960 in Greenwood, Mississippi-Leflore County. For his mother, he was the fifth of nine children and for his father he was the second of seven. Willie was affectionately known as “Big Brother Almighty”. A sister preceded him in death. His bonus father, Nathaniel Bush who helped to rear him, also preceded him in death. Mr. Bunch was educated in the Saint Louis Public School System. He was passionate about education. He earned three Associate Degrees and a Bachelor of Science from Austin Peay State University. He was very proud to be the first of his siblings to receive a college degree. He was raised in a God-fearing home and family. He kneeled to pray to God every night, no matter what time he went to bed. He was very family-oriented and loved his family unconditionally. He was a Staff Sargent in the United States Army, where he served in the 101st Airborne Division, Law Enforcement Command. He was very proud of his ‘Soul Patrol’. During the Gulf War, he was the Assistant to the Executive Officer of Law Enforcement Command. He would often say that he accepted Christ during his time in the military and he knew that God’s hands of protection brought him safely home. He was a member of Greater New Elevation M.B. Church under the leadership of his brother, Pastor L.C. Walls. He was a devoted son, husband, father, brother and friend. He never met a stranger and lived God’s word to help those in need. He loved sports and was grateful to have a wife who loved them just as much. He was a dedicated sports program coordinator and coach. He founded the Youth Development League; he felt that in every sport-the children should be taught the basics first and foremost. He was the best grandfather in the world to his grandchildren, known as the 9G’s. He was very proud to see the eldest, Jivonni, finish high school this January. He was the best uncle to all his nieces and nephews; they all respected and looked up to him for leadership and guidance and of course for laughs and barbeque. He was the favorite cousin, the favorite nephew and just had a strong love for family. He was a selfless and caring man, who had an impact on every person that he encountered. He was often told that he should have been a comedian, for his jokes were endless and his jovial personality always made others smile. He was always the “life of the party”. He believed that life should be lived and was meant to be enjoyed! Willie loved to travel and entertain. His family affectionately called him the “Fishman” because he loved to do fish fry Fridays for his family. He had a great love for genealogy and ancestry. He began hosting Juneteenth Celebrations to bring the family together to share information and celebrate history. He had a passion for boating and golfing. Willie had amazing business knowledge and was a member of various organizations for business and community service, including Optimist International-Gateway Optimist Club. Willie Edward leaves to cherish his memories: his devoted wife ~ Angelia Dixon Bunch; his loving parents ~ mother, Ora Bush and father, Joseph McCray; children ~ William, Jennifer, Johnathan and Alana; nine grandchildren ~ Jivonni, Javon, Jakhi, Willam, Joniah, Johnathan, Adrian, Jisaiah and Juelz; siblings ~ LC Walls (Victoria), Samella Williams (Carl), Sammie Bunch (Renee), Ora Ewing (West), Maretta Bush, Nathaniel Bush (Sharon), Angela Harris (Anthony), Edwina Simpson, Joseph McCray, Jr, Joseph Lawrence McCray (Sandra), Terrance McCray (Gloria), Joel Kenneth McCray, Joseph Marcus McCray and Courtney Marshall; several aunts and uncles; and a host of nieces, nephews, relatives, & friends.

Willie Edward Bunch son of Ora V. Walls Bush & Joseph McCray was born on November 26, 1960 in Greenwood, Mississippi-Leflore County. For his mother, he was the fifth of nine children and for his father he was the second of seven. Willie was... View Obituary & Service Information

The family of Willie Edward Bunch created this Life Tributes page to make it easy to share your memories.

Send flowers to the Bunch family.